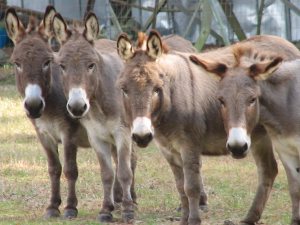 All About Miniature Donkeys

Miniature donkeys, sweet faced, soft eyed, shaggy, friendly and affectionate. They have won the hearts of most of those who have had the pleasure of being exposed to their charms. Today they are the beloved and often pampered pets of their owners, yet their history has not always been so kind to them. Originally from Africa, they arrived in the Mediterranean islands of Sardinia and Sicily to be beasts of burden. They pulled carts, carried loaded packs, and did other light farm work. Some accounts have it that hey were often underfed, over worked and not infrequently, abused.

The story of their miserable situation was told to a Mr. Robert Green, a New York stockbroker with a farm in New Jersey, who ordered six jennies and a jack, sight unseen, while on a trip to Europe. They arrived in New York in May of 1929. Unfortunately a few months after their arrival, they were attacked by dogs and three of the jennies were killed. The jack and remaining three jennies were the original foundation herd of miniature donkeys in the United States. One of the jennies was pregnant and on Columbus Day 1929, she gave birth to a little jack who was named Christopher Columbus, the first miniature donkey born in America.

Mr. Green kept his donkeys as pets and delighted in driving them in the many special small carts he had made for that use. He continued to import others from the Mediterranean area as well. He only sold a few of his cherished little donkeys when his herd became too large, and in 1935 he had a herd of 52 donkeys. Among his buyers were Mr. Richard Sagendorph, Henry T. Morgan, and August Busch, Jr. (Whose donkeys you can find in pedigrees as the “Belleau” prefix). These families also imported more of the little donkeys as well and were the original developers of today’s donkey stock. It has been reported that pure Miniature donkeys in the Mediterranean area have become nearly extinct.

Mrs. Langfeld’s concept of breed perfection was the original stocky, draft type animal with straight legs and head held erectly. She preferred jennies to be 32″ or under and gray-dun in color. Bea Langfeld established the original registry The Miniature Donkey Registry of the United States in 195 8. She turned the registry over to the stewardship of the American Donkey and Mule Society in Denton, Texas in 1987. The original registry listed donkeys to 38″ in height. The breeders got together and decided to reduce the recognized height to 36″ and this change was adopted in 1987.

Today the Mediterranean Miniature Donkey enjoys increasing popularity in the United States and the current population is estimated to be from 10,000 to 15, 000. As many animals are not registered it is difficult to have an accurate count.

What accounts for this great popularity of the Miniature donkey? Any donkey owner and enthusiast can spend hours telling you. Mostly it is the nature of the little guys. They are exceptionally friendly and affectionate. They enjoy people about as much as people enjoy them and tend to greet their owners with displays of affection and attention getting wiles. They will nudge you and nibble on your clothing and “talk” to you with brays, snuffles and snorts. Miniature donkeys are docile and surprisingly intelligent. They learn quickly and are easily trained, due in part, to their willingness to please. They make especially good pets and companions for children, elderly people and people with disabilities because they are so calm and do not bite or kick by nature. As they will live from 25 to 35 years they are truly lifetime companions.

Besides being excellent pets, the donkeys are easily trained to pull a cart or wagon. Many people enjoy showing their donkeys in driving, halter or pack classes. Due to the popularity of these activities there are a growing number of donkey shows across the country today. Miniature donkeys can carry a pack up to 75-100 pounds if well conditioned and properly fed and make a fine trail companion for hikers and backpackers.

Because they are small, they do little damage to trails and the countryside. They are also great fun for parades, petting zoos, Nativity Scenes and the like, always attracting a lot of attention and seeming to enjoy it all. Next to their winning personalities is their appearance. They are just plain cute! Their hair may be flat or burly, smooth or wiry, long or short, but is often shaggy, particularly in the cold months. They have large, gentle eyes, long ears and soft noses. They are at most 36″ high and may be as small (very rarely) as 26″ tall. Gray-dun (gray body color with the cross over the shoulders) is the most common color with brown and spotted becoming popular as well. Sorrel, white and black may also be found but are not as common. Nearly all miniature donkeys have a line down the back (dorsal stripe), with a cross over the shoulders. There are several charming legends regarding the origin of the donkey’s cross.

Miniature donkeys are easy to care for because they are quite hardy and require a minimum of space and care. They do require a good supply of fresh water and a free source of salt or a salt/mineral block. They get by well on pasture grass and good quality grass hay. Miniature donkeys adapt well to almost any climate but they do need a good three-sided shelter to protect them from the wind, rain and winter weather. Since their bodies are smaller than most farm animals they need protection from cold, wet winds. Donkeys need to have their feet trimmed every 6-8 weeks but do not need to be shod. Many owners learn to do this task for the donkey themselves. Worming should be done a minimum of two times a year and certain vaccinations may be appropriate depending on the environment and circumstances.